Where the Buffaloe Roams by John Buffaloe

At a Buffaloe 500 D/S back in the mid-’90’s Tim met a legendary woods rider from northern Indiana named Jim McCabe. An interesting and egotistical fellow, he had printed up these HUGE 30″ square pieces of paper with reprinted articles centering on his motorcycling exploits and was handing them out at the event. As mentioned in the following article in his day he could back up his bragging with results.

Anyway, the following is a transcript of a regular column John Buffaloe did for the Indiana Motorcycling News sometime in the early ’70’s mostly about the first Buffaloe 500 and Mr. McCabe. Tim thought you might find this interesting. Tim has taken some liberties to grammatically edit the article. 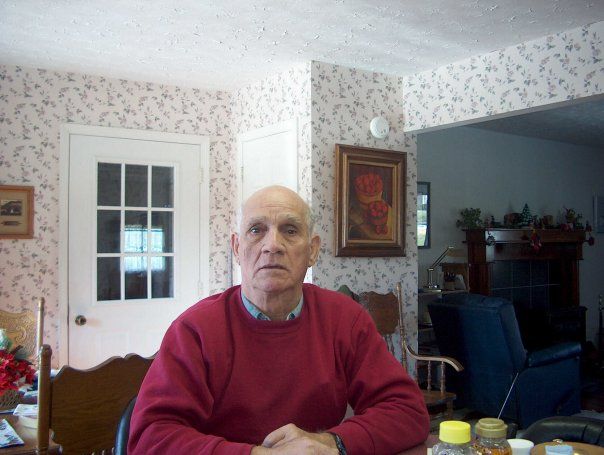 Where the Buffaloe Roams…by John Buffaloe

After spending four years in the service during World War Two one would think that I would have better sense than to volunteer for anything. When I volunteered to contribute to this column in I. M. N. I had no idea how difficult it could become to find suitable material to write about. During the summer months when the racing program is underway it’s easy to report on people and events involved in Indiana motorcycling. However, when the snow flies motorcyclists are not too active especially this one so in order to make a contribution the format has to be changed somewhat.

The snow is falling and it brings back memories of past times when I was not so inactive. Those who have been around cycling for awhile will remember the Ground Hog Derby Run, a cross-country run through the hills of Morgan Monroe State Forest. The woods bug had bitten me and I attended the last one held there as a spectator. I believe the year was 1960 but I am not sure. At any rate the headquarters was at a shelter house just off what is now Old State Road 37. The start was a mass start, all classes at the drop of the flag, but the interesting thing about it was that all riders had to ride over about a quarter mile of ice on Bryants Creek Lake to get to the start. Many riders did not have knobby tires so you can imagine the antics and donuts they cut on the ice.

Larry Roberts, now expert rider No. 56 I believe, was the eventual winner on a 165cc Harley. The run was laid out by Bob Schulteti for an Indianapolis club. As I recall he was riding one of the first Harley Davidson Sprints and the sound of his machine made cold chills run up and down your spine, if you dig the sound of a good single four stroke. Bob was tough, tough competition at that time. A couple of years later I was privileged to ride on the same number with him at the Jack Pine in Michigan. Although on the same number I was mostly catching up and trying to keep him in sight. He was riding another new Sprint and believe me he could get through the woods.

Tony Ford was entered in that particular Ground Hog Derby on a new 175cc Maico. It was the first Maico I had ever seen and when he came over a hill and tore through a stand of thick willows as though they were not there I knew that he was a little off. After riding with him and against him for a number of years in the same kind of events I’m still not convinced that my first impression wasn’t correct.

Someone, I wish I knew who, had made a trophy out of welding rod or some other material and depicted a ground hog on the trophy. Although practically worthless in terms of money it was one of the most coveted trophies in the state. Winning the Ground Hog Derby was equal to or more prestigious than winning the Buffaloe 100 in later years. As I recall Larry Roberts was riding out of Schulteti’s shop and the trophy went back to their trophy rack for a few years.

While bench racing with Bob Schulteti and Larry Roberts one day at my old Axsom Branch cabin we speculated on the possibility of reviving the Ground Hog Derby. The wet snow that I see out my window reminds me of the day of that run. A wet freezing snow fell most of the previous night and part of the next day. There was a steep blacktop hill near Belmont on the way to my place. Many riders had to leave their trucks and cars parked along the road and ride their bikes back to the cabin.

Directly across the road from the cabin atop a steep hill was the start and it was so slick and treacherous underfoot that it took two hours to get all the riders lined up to start the race. Only a handful of riders were able to ride up to the start under their own power. Jim McCabe, of near Huntington, Indiana, was there on a 250 Maico that was practically hand made by him. Jim served notice when he arrived that he would show the boys how to climb that nasty hill as soon as he donned his riding gear. Many snickered and a few guff-haws were heard. The hill was a glare of ice and no one was making it to the top unassisted. McCabe, with all eyes glued on his attempt fired up the Maico, rapped it a few times, yelled like a banshee for clearance, stood up on the pegs and to everyone’s amazement rode up the hill as if out for a Sunday spin. McCabe had a way of demoralizing the competition. He had no qualms about telling you how good he was nor how bad he was going to beat you. Then he would promptly do exactly what he told you he would do. Jim taught me how to let air out of my tires when slick and muddy and many other little tricks of riding in the woods. He showed everyone entered in this last of of the Ground Hog Derby runs that he was the master of this rough sport at that time. The run was approximately 55 miles in length. We started at 1:00 PM and had to call it off about 8 miles from the finish due to impending darkness. McCabe was the only rider to make it to the finish line. It was typical of Jim in those days to remark as he received the trophy “If I’d known the trophy was this nice I’d have rode harder.”

We never ran the Ground Hog Derby again and as far as I know Jim McCabe still has the trophy. However, Bob Schulteti and Larry Roberts did a good job teaching me how to lay out and mark a woods run and eventually through the experience gained the Buffaloe 100 came into being.

In those days much of the runs we put on were run over ground that is now covered by Lake Monroe. How different it was then! Private property owners in the area, if not welcoming us with open arms, did permit us to use the ways and means through their property and often on the day of the race assisted us with gate openings and such. They and their families would gather along the course and urge the riders on or direct them on to the right trail. The difference between then and now is typical of how governmental agencies either drastically change for the worse when they gain control or eliminate the private citizen’s rights and freedoms altogether. Perhaps, I keep trying to convince myself, the lake and the water sport it affords does infinitely more people good than it did us harm. It does appear that off-road vehicles and motorcycles have suffered more curtailment of their rights and freedoms because of the lake than any other group.

Fortunately, there is a late comer to motorcycling who is doing something for the woods riding motorcyclist. John “Johnny Bob” Robinson, through sheer will power and hard work, has planned a 50 mile and another 100 mile hare scrambles to be held near Worthington on February 25 and March 25, next. A flyer and pre-entry blank is in this issue.